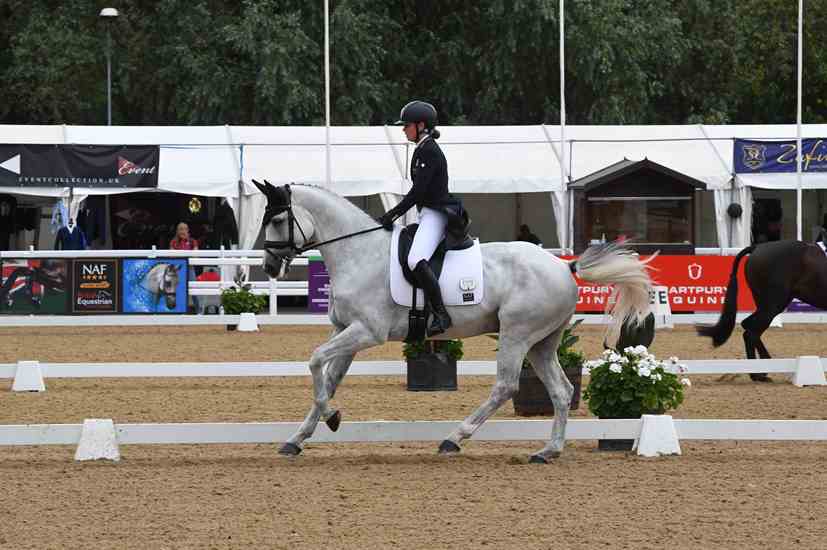 The first day of dressage in the FEI Eventing European Championships for Young Riders and Juniors saw Team GB put in a number of stellar performances in front of a home crowd.

Alice Casburn was the first of the Team NAF British riders to perform their tests at the Championships. She and Topspin delivered a score of 33.8, getting the team off to a great start and leaving them competitively placed in eighth individually.

Germany continued their strong run of form with a number of eye-catching tests coming during the late morning session. However, Ibble Watson and Aristoteles S Z captivated crowds with a test earning a score of 29.4. Her performance was good enough not only to help the British team into the gold medal position at this stage of the Championship, but also to give them an early lead in the individual competition.

Polly Muirhead had started the week as a reserve for the squad but was called into action on Monday when Maja Hullah had to step down. Despite the last-minute call up, Polly and Penhill Touch of Class put in a fabulous performance for a score of 35.8 and to be lying in eleventh place as an individual at the end of day one.

Germany are enjoying a stellar week at Hartpury and continue their fine run of form by taking an early lead in the team competition with a score of 61.4 at the end of the first day. However, the Team NAF British riders are hot on their heels, just 0.2 penalties behind with a score of 61.6.

Grace and Cooley Ramiro were next up for the team and they equally delivered, keeping their cool to post a score of 30.5 and keep Great Britain within touching distance of the gold medal.

Three British riders remain in the top 10 of the individual competition, after Jaymee Savill and Grange Ash Sparrow achieved a score of 32.2 to take tenth place.

Speaking to British Eventing, Youth Performance Manager, Darrell Scaife said, “We are enjoying being at a championship on home ground and the riders are receiving terrific support. The riders are on their A game and the two squads have very definitely become one team.”

“It’s great to be here at the Hartpury Europeans,” added Dressage Coach, Tracie Robinson. “We have had two really good days training and I am really pleased with all of the rider’s enthusiasm and positivity. Today’s Dressage has gone really well, and I am very happy that they all produced good, mistake free tests and achieved good results.”