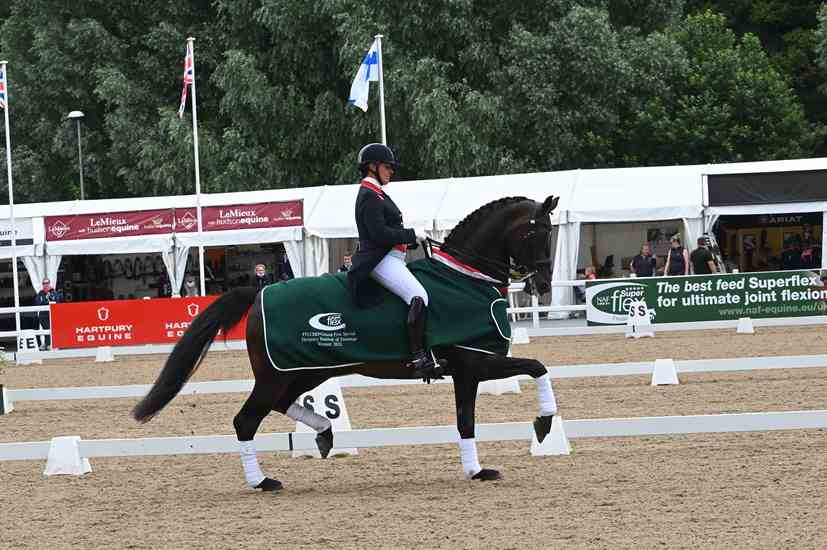 Fiona Bigwood enjoyed a thrilling success in the Hazlewoods-sponsored grand prix on Friday, onboard her own Hawtins Delicato. Fiona, who won team silver for Britain at the 2016 Rio Olympics, bought the Diamond Hit 13-year-old from Carl Hester in 2020.

This result was their first international grand prix victory with an impressive score of 74.09%.

Speaking to Horse & Hound after her test, Fiona said, “I am absolutely thrilled, I am eventually finding the buttons on this horse. He is so fun to ride and goes in with so much energy, but it’s just that Carl always used to make it look so easy, and I’m just trying to work it out. I feel like I’ve really turned a corner now.

“I loved the last centre line – he was really going, I totally trusted him and off he went. He’s just really good fun to ride. He wants to do it.

“I think people always underestimate what it’s like to take on a horse from someone else – they think, ‘oh, you’re buying a schoolmaster and it’s fine’, but they are all special, these horses, and you’ve got to get that partnership and it does take time,” she added.

“There are two shows in Belgium that I’m hoping to go to, just to get him out – I think the more shows we go to, the better. I’m competitive, I have my goals, and I’d love to go to Aachen in September. But it’s just about having fun – I’m 45 and it’s about enjoying the horse.”

Richard Davison and the 15-year old Bubblingh led the 27-strong field for most of the class, with a mark of 71.69%. Becky Moody and Jo Cooper’s 11-year-old mare Famke PF finished in third place with a score of 71%.

“I had quite a nice ride – a very different ride to I’ve ever had before, because he was actually quite relaxed and in fact possibly too relaxed in certain places, so that was a bit of a new experience,” said Richard. “It is one I welcome, I must say, because I’ve been looking for it for the last five years. If I was to criticise, he needs to be a little more switched on, but it’s hard ever to imagine saying that about Bubblingh.”

Richard may also target the Aachen CHIO in September, and possibly some World Cup shows in the winter.