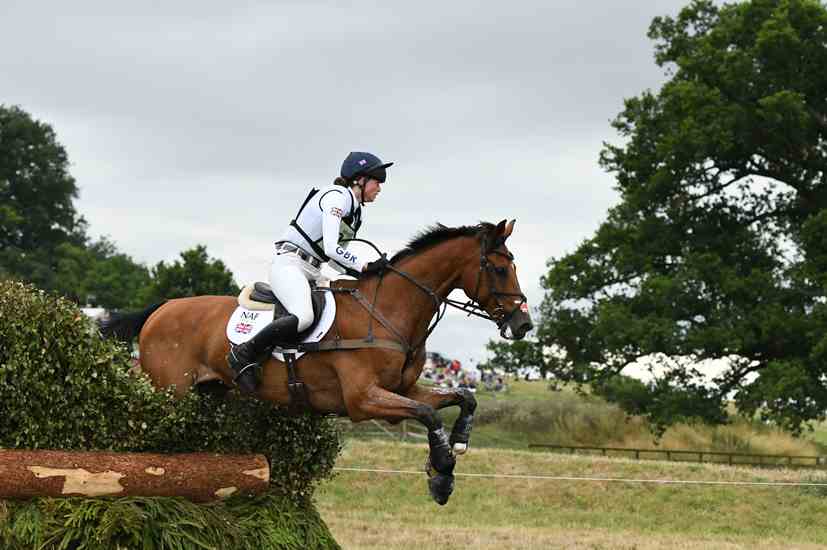 Eric Winter's cross country courses provided a superb day of competition at the FEI Dressage and Eventing European Championships for Young Riders and Juniors on Saturday.

In front of a home crowd at Hartpury University and Hartpury College in Gloucestershire, the home nation under the banner of Team NAF delivered a brilliant performance to leave the Young Rider team in the gold medal position and the Junior team in silver, just one mark behind the Germans.

All horses and riders returning to the stables safely at the end of the day, too.

Rosie Scott-Ward, Pro-Vice Chancellor at Hartpury, said: "We feel very privileged to be hosting these championships at Hartpury and today has been a truly Super Saturday. The Junior and Young Rider talent on display has been inspiring and we've no doubt seen European, World and Olympic champions of the future in both the freestyle dressage and eventing cross country. From a British perspective, it's particularly exciting to see Team GB going into the final day in gold (YR) and silver (JR) medal position alongside some outstanding individual performances that also leave us in contention of medals."
Eric Winter, Cross Country Course Designer, said: "It's been a great day at Hartpury. I thought both courses worked very well, and the time had its influence which is a crucial part of cross country. Most importantly, all the horses and riders returned to the stables safely at the end of the day. I think lots of riders learnt a lot from riding around the courses at Hartpury, which should bode well for their future as they move on through the levels."

In the European Championship for Young Riders supported by Commscope Ruckus the time proved incredibly influential, with just four rounds inside the time recorded throughout the whole competition. However, three of the four rounds were from British riders as well as Ireland’s Sadhbh Bolger. As pathfinders for the British team, Alice Casburn and Topspin were one of the first combinations to take on Eric Winter’s challenging track, which required brave and bold riding as is customary at the Gloucestershire venue. The pair flew round the course to post one of the fastest times of the day and give a boost of confidence to the rest of the Team NAF British riders.
Ibble Watson and Aristoteles S Z were next on course, adding 8.4 time penalties to their dressage mark to leave them on a score of 37.8 and in eleventh place individually. Millie Juleff and All We Need overcame a hold out on track to deliver a superb clear round. They became the second British combination to stop the clock inside the optimum time, staying on their dressage score of 31.4 and moving up into the individual silver medal position.
Molly Faulkner and Call me Cooley put in another stellar performance – the third British round inside the optimum time – confirming the team’s place at the top of the standings and moving Molly up into fourth place individually. Phoebe Hughes and Top Biats (competing as an individual) added just 5.2 time penalties to their brilliant dressage score, leaving them on a total of 30.9 and keeping them in that coveted individual gold medal position. Polly Muirhead and Penhill Touch of Class, an Individual combination, added just two 2.4 time penalties to their dressage mark to be lying on a score of 38.2 in twelfth.

Britain's Junior team remain in the silver medal positions after all four team members delivered quick clear rounds – three of which were inside the optimum time. The team are now just one mark behind the Germans as we head into tomorrow’s show jumping.

Team pathfinders, Finn Healy and Fathers Compromise finished the day on their dressage score of 31.1 and well-placed in seventh position individually.

“She was amazing,” said Finn after their round. “I’m so over the moon. I was really nervous this morning because there’s a lot of pressure being first out. I wanted to make sure I got a clear home for the team to get us off to a good start and I’ve done that, so I’m really chuffed.”

Grace Donnor and Cooley Ramiro were the second of the team riders out on course. They picked up just 4.4 time faults to give them a score of 34.9. Jasmine Underwood and Indian Girl G were another combination to come home clear inside the optimum time. The stayed on their dressage score of 31.1.

Isabelle Cook and Mexican Law were the anchor leg of the British Junior team, lying in the silver medal position heading into cross country. If they were feeling the pressure Isabelle and Mexican Law didn’t show it, finishing the cross country on their brilliant dressage score of 26.6 and remaining in the silver medal position.

Individually, Holly Clarke and Nico are lying sixth with a score of 30.5 and Jaymee Savill and Grange Ash Sparrow, eleventh with 32.2.

“I couldn’t be more delighted for them,” said Youth Performance Manager, Darrell Scaife speaking of the Junior team’s performance. “We’ve had six clear rounds, five of them inside the time. They were really competent and capable at their job, so for me it was a very straight forward morning!

“It’s been a really great afternoon after a really wonderful morning,” he added after the Young Riders performance. “The Juniors set off and the Young Riders really followed them. They had a plan, they stuck to their plan, they were very clear about what they wanted to do. It’s their competition and there are medals to win and they were very hungry to fight for them.”

“What’s been really wonderful to see is that these two squads have really become one team. I’m really chuffed. It’s a strong position to be in. We’ve still got a lot of work to do tomorrow but I’m really pleased with everybody.”

Annabella Pidgley, the 2021 Individual and Freestyle silver medallist, competing at her second Junior European Championships, added another silver medal to her collection in this afternoon’s Junior Freestyle competition. Partnered by the exciting young mare, Espe (Escolar x Dimaggio), 17-year-old Annabella earned a score of 77.600% to take her place on the podium between Denmark’s Sophia Boje Obel Jørgensen with Brilliant (77.695%) and Mathilde Juglaret with Caporal de Massa for France (77.225%).

After spearheading Great Britain to a team bronze medal on Wednesday, this new partnership continues to display their immense potential. Today, riding to an instrumental Taylor Swift compilation, Annabella and Espe showed powerful, elastic half passes and great control as the mare moved fluidly from extended canter to walk, into walk pirouette.

“It’s exceeded all my expectations,” said a delighted Annabella following the medal ceremony this afternoon. “She’s [Espe] only eight years old, and she really just pulled it out the bag. I can’t believe I have a silver medal."

Great Britain’s Sophie Wallace presented a test to be proud of with Ursula Bechtolsheimer and Laura Tomlinson’s delightful Westphalian mare, Rosalie B (Rubin Royal x Newcastle). Sophie, at 15 and astonishingly in only her first year competing in dressage, continued her championship debut with a freestyle awarded 72.370% - 12th place.

Myles Graham made a few mistakes in his freestyle programme with Caroline Bell’s Nibeley Union Hit (Nibeley Union Jack x Sandro Hit) but has enjoyed a superb week of competition at Hartpury so has lots to look forward to.

Drawn fourth to go, Great Britain's Anna Dalrymple (19) and Vagabond de Massa (Rieto x Xaquiro), who were placed 16th in the Individual competition, rose up the leader board to 13th place today with an expressive and well-executed performance to their Tom Hunt-produced Kung Fu Panda programme, earning a super score of 73.813%.

Caitlin Burgess and Chocotof have impressed all week. Best of the Brits individually in eighth place in the Team Test on Wednesday on a score of 72.765%, and 12th in the Individual (72.831%) coming into today’s Freestyle, they really have celebrated the championships of their career so far.

Jessie McConkey’s sensational week continued with another personal best performance and a phenomenal fifth place aboard her powerful dance partner - the 13-year-old mare, Lady Gaga (Quaterback x Solos Landwind). Fifth to go after the midway break, Jessie and “Millie” performed to an emotive music programme and starting with their canter tour, they rode through a clever floorplan showcasing the mare’s flamboyance to great effect.

Jessie completed her test one-handed in extended trot, into halt, immediately followed by rapturous applause from her teammates, support crew and the enthusiastic crowd at Hartpury. As the score of 77.381% was announced – their third PB of the week – they rocketed into the silver provisional medal position behind Austria’s Felicita Simonic and Immowert’s Ivar (78.313%).

As the race for medals heated up, Germany’s Lucie-Anouk Baumgürtel and Zinq Hugo FH (Spielberg x San Remo) took the lead on 78.900% before Austria’s Paul Jöbstl and Bodyguard 49 (Burlington x Pik L.) posted a new PB of 79.206%. Jöbstl, a double individual bronze medallist at the 2021 Junior European Championships with this horse, rode to an Elton John compilation.

Last to go, Germany’s Helena Schmitz-Morkramer took charge riding DSP Lifestyle into the gold medal spot with a new PB of 80.419% pushing Jessie and Lady Gaga a little down the leader board, but still in an admirable fifth place.